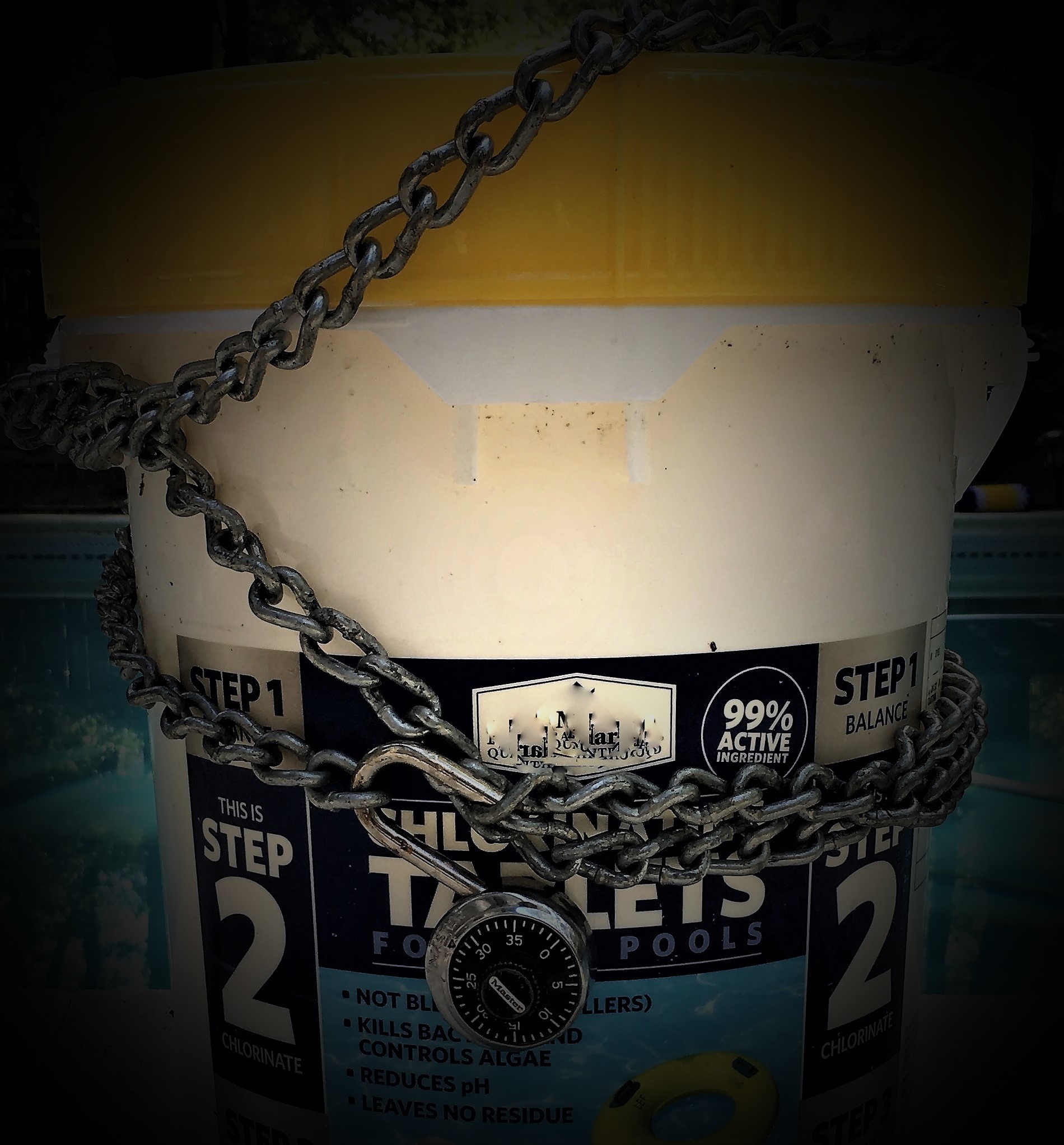 The Myth: If your Cyanuric acid level is high enough, it will lock up all of the Chlorine in the pool.

The Facts Cyanuric Acid, Chlorine Lock, and the CDC

In October of 1965, John R. Anderson Ph.D. P.E. published a paper titled “A Study of the Influence of Cyanuric Acid on the Bactericidal Effectiveness of Chlorine” which has been credited by many as the origin of the Chlorine Lock Myth. In fact, the publication actually supports a lesser-known, but more fundamental belief. Anderson’s study was sparked by Marks, Wyss, and Strandakov’s research in “The Mode of Action Compounds Containing Available Chlorine,” published in 1945, which had shown that the bactericidal properties of chlorine vary within vast limits in the presence of different compounds.

Dr. Anderson was actually able to determine the amount of free chlorine necessary

to achieve a 99% kill rate of Streptococcus faecalis (now Enterococcus faecalis) would increase at a rate substantially higher when raising the Cyanuric acid level from 0 ppm to 50 ppm than it would as we increase the Cyanuric Acid content to levels > 50 ppm. The time necessary to achieve this kill rate at 50 ppm would be 2,300.00%  greater than the required time at a CYA of 0 ppm; the sufficient time to accomplish this kill rate at 100 ppm would be only 88.70% greater than the time necessary at a CYA of 50 ppm.

“As far as measuring CYA levels <20 ppm, that’s a little tricky. Right now, the standard turbidimetric method can only go as low as 20 ppm with most test kits. The standard color pads on test strips are not much better. Most start at zero, and the next standard is 40 ppm. It’s a guessing game.  Colorimeters/spectrophotometers can go a little lower than 20 ppm. For example, Taylor’s TTi 2000 Colorimeter can measure CYA in a range of 7-200 ppm” – Wayne Ivusich, Director of Education, Taylor Technologies

The paper not only shows an increase in inactivation time

about increasing levels of cyanuric acid, but it does also provide research on chlorine’s effectiveness being pH-dependent. This research is relevant because it proves that a higher level of chlorine is necessary to achieve the same inactivation rate at higher levels of Cyanuric acid. At a Total Chlorine level of 0.48 ppm, a CYA of 50 ppm, and a pH of 7.0;  Anderson was able to obtain a 99% kill rate of S. faecalis in 4.7 minutes.

He was able to achieve that same kill rate at a Total Chlorine level of 0.97 ppm, a CYA of 100 ppm, and a pH of 7.0; in 4.1 minutes. This does evidence that increasing the level of Total Chlorine by 102.08% will yield only a 12.77% decrease in germ inactivation time (CT: Chlorine Contact Time) when faced with a 100% increase in the level of Cyanuric acid. In other words – the higher the cyanuric acid level gets in the pool, the higher a level of chlorine, you will need to inactivate pathogens.

“The best option that we have for measuring Cyanuric Acid is using Hach Method Cyanuric Acid, Turbidimetric Method 8139. This is still turbidimetric so the chemistry is still the same, but it removes the subjective nature of using a visual interpretation. Instead, it measures the percent transmittance of light through the sample to calculate the result, which is much less subjective than doing it visually, and you can get a higher sensitivity and resolution, which leads to a lower range. The range of the test is 7-55 mg/L on a Colorimeter and 5-50 mg/L on a spectrophotometer. The lowest cost instrument that can run this method is the DR900 (Hach DR900) which is a colorimeter” – Matt T. Technical Support of Hach Company

This relationship between Chlorine and Cyanuric acid

was later revisited by Ben Powell of Pool Solutions. This can be found in his “Ben’s Best Guess Swimming Pool Chlorine Chart” developed in the mid-70s. It was then discussed in greater detail, more recently (October 2015), in an article written by Eric Herman that appeared in AQUA Magazine titled “New Thinking: Chlorine/Cyanuric Acid In Balance”. Here he interviewed industry chemical expert Robert W. Lowry on the subject. It was in Bill Powell’s “Best Guess” that the rule of 7.5 would come into effect.

in order for a swimming pool to be both algae and bacteria-free, one would need to maintain a chlorine level that was 7.5% of the cyanuric acid level in that pool (i.e., a pool with a CYA level of 100 ppm would require a Chlorine level of 7.5 ppm). This relationship had served as a footnote in the CDC’s “Fecal Incident Response Recommendations for Pool Staff,” as a disclaimer, for well over a decade before the effect on germ inactivation time would appear in the instructions regarding the diarrheal incident:

“This level of Crypto inactivation cannot be reached in the presence of 50 ppm chlorine stabilizer, even after 24 hours at 40 ppm free chlorine, pH 6.5, and a temperature of 77F (25C)”. – CDC Fecal Incident Response Recommendations for Pool Staff, 2010 edition

In the fall of 2016, addressing the Cyanuric acid level became an actual step

in the CDC’s “Fecal Incident Response Recommendations for Aquatic Staff.” With that, as many health departments utilize the CDC’s fecal incident response guidelines within their regulations, lowering the Cyanuric acid (Stabilizer) level to 15 ppm or below before you begin treatment is now the first step in handling a diarrheal incident in a public swimming pool. Even then, with a CYA level of 1 ppm – 15ppm, the requirement is now to raise the free chlorine concentration to 20 ppm and maintain it for 28 hours with a pH of < 7.5, vs. the 20 ppm for 12.75 hours with a pH < 7.5 we have all grown to know and love. (which is still the procedure with a CYA of 0 ppm) as it had been in the past.

“Getting pools down <15ppm of CYA before treating for a fecal incident seems like a tough haul for many public pools who routinely run in the 30-70 range. Note that most melamine-based test methods for CYA have a “reagent-blank” of about 3 to 5ppm due to the mixing of the reaction. It is challenging to make a true zero 100% perfectly clear when melamine is added.” – Richard LaMotte, VP Sales & Mktg, LaMotte Company

turbidimetric means of testing cyanuric acid (Current method Taylor Technologies), with a low end capability of 30 ppm, many will need to change their method of testing in order to meet both CDC recommendations and DOH regulations regarding public pools pertaining to Fecal Incident Response.

5 thoughts on “Cyanuric Acid, Chlorine Lock, and the CDC”