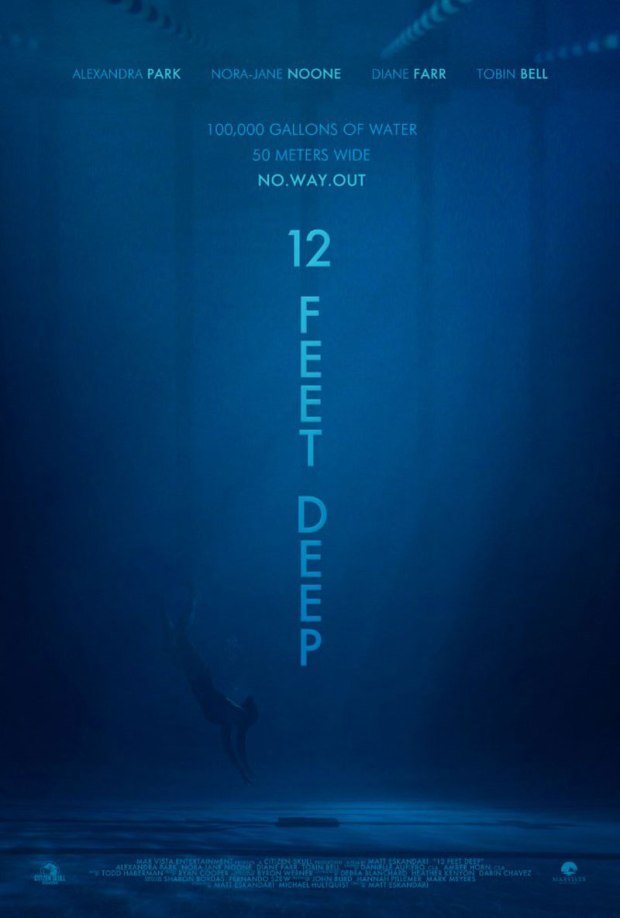 Diving into the Movie: 12 Feet Deep

When Aquatics International magazine first called me and asked if I would be interested in a project that involved watching a horror movie that starred Tobin Bell and then offered to pay for the rental… I mean, C’mon!!! Scary movies are passion. And… offering one up that featured the star of the SAW franchise?!?! This was a no brainer.  The Movie: 12 Feet Deep.

The movie is a tale of two sisters (Nora-Jane Noone – Brooklyn 2015; Alexandra Park – Packed To The Rafters 2011) who have normal sibling issues, and that does become part of the premise of the flick as the two attempts to resolve differences while trapped beneath a pool cover in a natatorium. Tobin Bell (Jigsaw) serves as McGrady, the pool manager (think of the limitless possibilities in directions this could go). Still, it sadly only makes a brief appearance at both the beginning and end of the film. TWhiletrapped, the women re tormented throughout by a parolee (Diane Farr: Californication 2009) at the facility, who is there due to, what I assume to be, some work-release program.

The article released in the trade magazine (that included analysis from myself and others) in July of 2017 focused on that in the film, grossly exaggerated. However, have you ever watched a psychological thriller that did not stretch the bounds of reality a bit? I have to admit, as a person who has spent my entire career in this industry, for as much fantasy as writer/director Matt Eskandari (Game of Assassins 2013) & writer Michael Hultquist (Victim 2010) had woven into the story (which I understand to be loosely based upon true events) – there was also a bit of fact. Some of these items, which I believe should have been included, did not make it into the 2017 pool industry review of the film.

There is a scene in the movie that does briefly brings attention to an area of major concern. Trapped beneath the cover, the two sisters dive down to the deep end of the pool in an attempt to dislodge the main drain grate so that it can be used as a tool to free themselves. At one point, while pulling and prying at the protective plastic, a section of hair from Bree’s (Noone) head is caught in the current from suction and drawn toward the drain cover. Suddenly, entangled, the young woman finds her head tied to the floor of the pool. She panics as the two attempt to set her free from the depths of the pool far beneath the surface (12 Feet Deep).

Impossible to pry a protective cover from the floor of the pool? In April of 2018, that is exactly what this Michigan boy did in a South Carolina resort’s lazy river. There are questions regarding the grate’s correct installation and whether it was secured properly (part of the VGB2008 Federal regulation, below). Due to the quick thinking of other guests, the boy who was stuck beneath the surface for 9 minutes miraculously survived. All NEWS reports indicate that the child has returned to school and needs to be monitored for years. Thank Goodness the boy seems to be okay.

As shown in the news report below, limb entrapment is one of five major suction entrapment forms. Also included are Hair, Body, Mechanical, and evisceration.

Hair entanglement (shown in 12 Feet Deep) is the leading type of entrapment in swimming pools. A person swims down in the main drain area, and their hair wraps within and about the slots within the floor drain. Suddenly, they find themselves literally tied to the floor. On December 19th of 2008, The Virginia Graeme Baker Pool and Spa Safety Act (VGB2008) went into effect. The federal regulation, signed into law by U.S. President George W. Bush, was named for Virginia Graeme Baker, a little girl who had died in 2002 when the suction from a spa drain had trapped her beneath the surface of the hot tub’s floor. The law pertains to suction outlets in ALL public pools, spas, and water features. It involves the utilization of a compliant drain cover that has been designed to aid in the prevention of these tragedies.

Is the movie far fetched? Well, So was Child’s Play and Nightmare on Elm Street. I mean, Split, and The Babadook is psychological thrillers as well, aren’t they? By no means am I comparing 12 Feet Deep to any of these multi-million dollar blockbusters, but they do ALL focus on the bending and twisting of reality. Isn’t that what a horror movie is all about? Though they will not receive any awards for their efforts, the actresses all did a fine job by scary movie standards. Then consider that ten-minutes of Tobin is always a welcome cameo in the genre. With scenes that could only exist in the writers’ minds, they did do some things right. B-rated or not, any movie that draws attention to real-life concerns in swimming pool safety is worth a watch.

12 Feet Deep is currently available on Amazon (see below)

When the sight of water fills you with an urge to kill, it only makes sense that you take a job working for a pool service company. That is exactly what Johnny Taylor (Randy Wayne – Escape Room 2018) did in “Death Pool,” directed by Jared Cohn (Atlantic Rim: Resurrection) and co-starring and Sara Malakul Lane (Cowboys vs. Dinosaurs 2015): Read our review on the movie Death Pool.

“There’s a Shark in the Pool!!!” Teens at a house party struggle to find a solution to a series of deaths that seem to have no end in sight due to a great white shark that has mysteriously appeared in the swimming pool. This one takes a poke at teen scream horror flicks and does it well. Please take a look at our review of the short film Shark Pool.