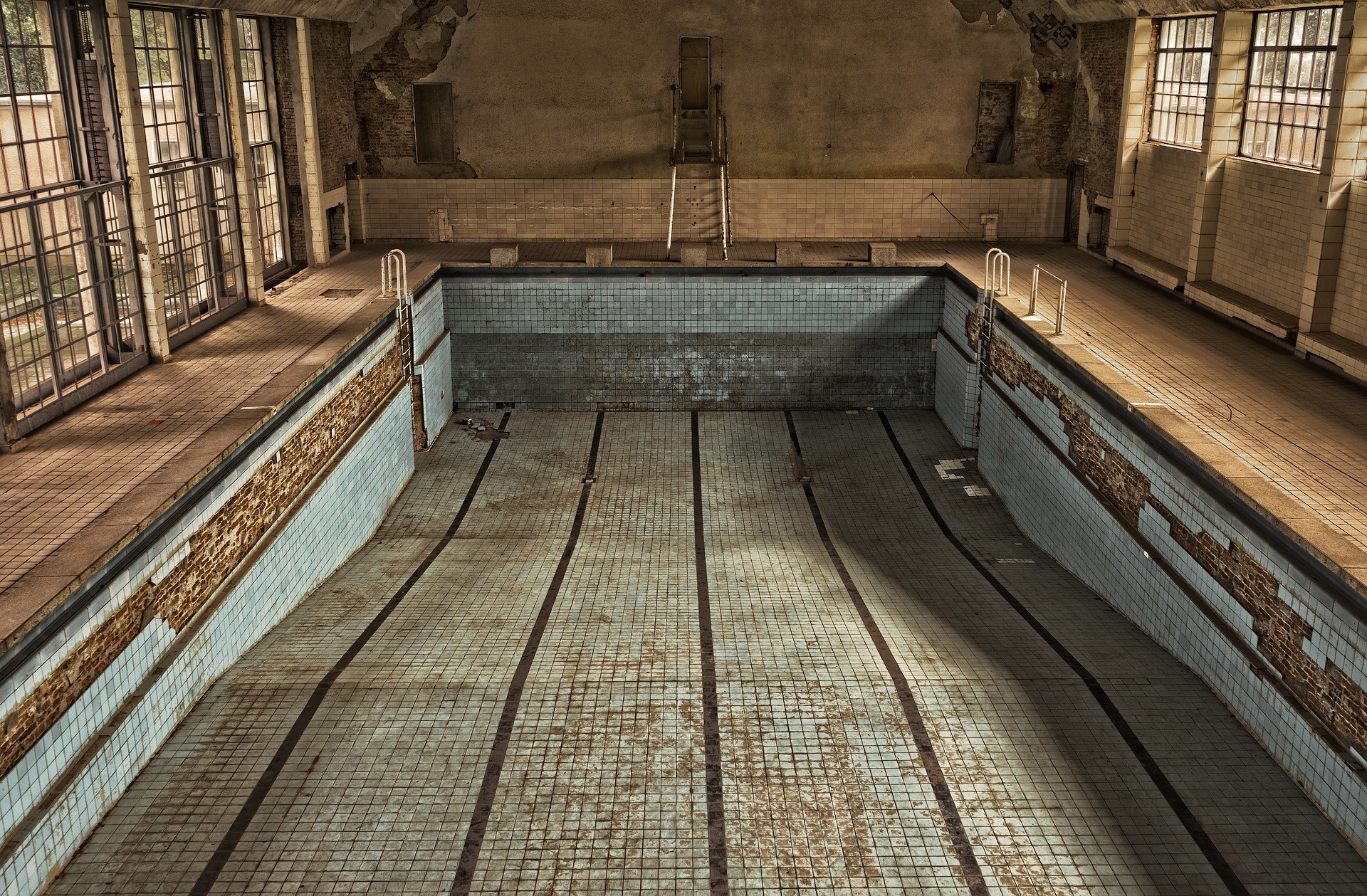 Paranormal events at swimming pools rarely get the notoriety of those at structures built of brick or wood, such as the domicile at 112 Ocean Avenue in Amityville or 916 Old Taylor Road in Oxford, Mississippi.

When we hear of events that occur at swimming pools such as the one aboard the Queen Mary, the details rarely extend beyond the appearance of wet footprints upon the deck of an empty pool.

You may hear of other haunts similar to the stories of the pool aboard the century-old ship, such as the swimming pool at Marquette University, The Biltmore Estate, and Two Guns. I’m afraid the history of each will be as wildly unknown and left to folklore in one as much as the other.

I do promise you that none of those you have the ability to visit will leave you with a feeling of inescapable dread comparable to the legend of the Paperback Phantom and the pool at the Archer Road Swim Center.

The facility has been abandoned now for nearly thirty-five years. The only indication that a building stands hidden in the hammock by live oak, longleaf pine, and sabal palm is a tattered sign with painted letters that have all but entirely blistered away.

It wasn’t long after the natatorium ‘boom’ of the ’80s that the Archer road facility had closed its doors. It wasn’t much before that when Ashlynne Scott had ‘fallen’ into the facility’s pool. Stories of strange goings-on have been reported at the Archer Road Swim Center and its Paranormal Swimming Pool ever since.

She would sit and read.

Thirteen-year-old Ashlynne was a regular at the junior Olympic size swimming pool even though she could barely swim. She would spend her weekends at the facility because several of her friends were members of the Dolphin swim team that would practice at the center.

On the deck, alongside the pool with books she had checked out from the book bus, and turning pages was how she spent her weekends throughout the summer months.

The horror is that no one noticed. She was up on the deck like normal and the next thing she was at the bottom of the pool. She was reading and then we were pulling her out. I just remember that book floating in the water with the pages coming out.

The chains were cut.

Despite the chained doors and boarded windows, people still manage to get in, and the dilapidated aquatic center has remained a ‘hang out’ throughout the decades. They almost always leave with some account of the girl in the dress reading at poolside.

Doesn’t matter how many times we patrol the area, they just keep coming. They’re like little ninjas, sneaking in. We’ve even had a manned car in the lot and they still find a way in.

A loud splash but no one there.

Some have said she could be heard softly reading to herself. Others have talked about the sound of turning pages in the silence. Perhaps the scariest have told of a sudden scream of a young girl followed by a very definite splash that originates from the pool that has been empty for three decades. Some say the whole thing is nothing but a swimming pool ghost story.

It has been told that the young girl was being teased by a group of boys that morning as she carried in her normal stack of two or three literary choices. At one point, one of the young men had taken one of Ashlynne’s books and held it tauntingly beyond her reach. Agnes Martin, the lifeguard on duty at the time, remembers ‘putting an end to the shenanigans’. Though the official reports state ‘accidental drowning’ many believe that it is likely that foul play was afoot.

When we attempted to locate the young man involved in the incident we had found that he had drowned during a swim meet several years later at a different facility. Apparently, the young man had been caught by the suction of the pool pump at the floor drain.

We may never know the truth behind how Ashlynne Scott drowned in the Archer Road Swim Center pool that Saturday morning back in 1985. However, if you should find yourself in that natatorium late at night, you may hear the faint voice of the young girl reading words from The Handmaid’s Tale by Margaret Atwood – the last book she had ever checked from the mobile library.

You may also find yourself unlucky enough to hear the blood-curdling scream of the young teen followed by the splash of someone falling awkwardly into a pool, the brief flailing of a desperate struggle, then the dead silence of an abandoned swim center and a pool that has been emptied and bone dry since 1986.

At least one person reports that the girl seems to ‘latch on’ to those that visit the site.

Me and my friends went in there with some beers, maybe eight or nine years ago. We didn’t stay long. The hairs on the back of my neck stood up as stiff as a frozen shadow. I still hear that little girl’s voice; it wakes me up when I’m sleeping. It’s not as bad as it once was but still maybe three or four times a month.