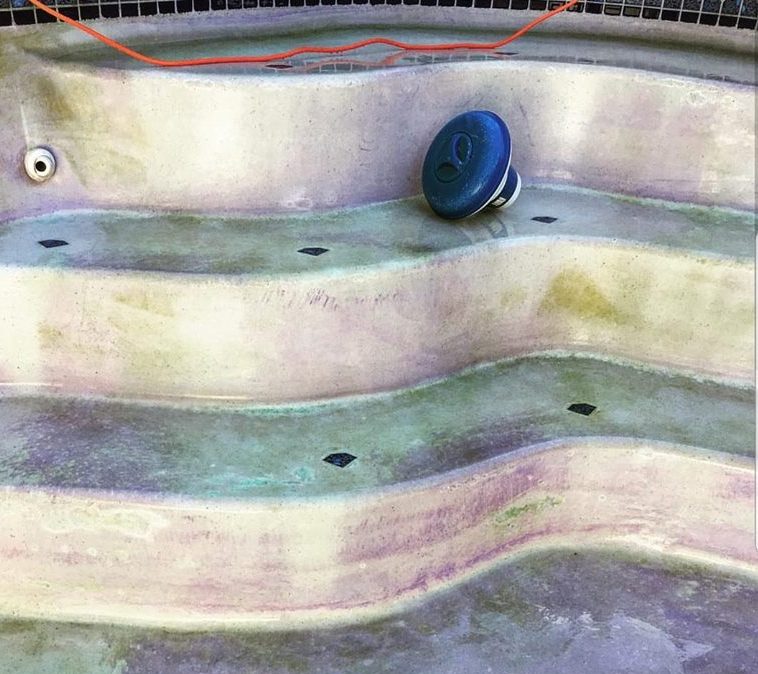 Part of the reason determining the cause of a stain or discolored water in a swimming pool can be challenging because the metal in water can present many different colors. There are many factors at play here, and as a Pool Pro, we must consider them all. In the following, we will check in on some of the many different metal issues a pool operator may face, but we have chosen to make copper our focus—copper Stains in Swimming Pools.

We chose copper for a couple of reasons, including the many variations in appearance, the commonplace use of copper-based algaecides, and the frequency of copper as the culprit.

The oldest metal object found in the Middle East consists of copper; it was a tiny awl dating back as far as 5100 B.C. – Stephanie Pappas, Facts About Copper, Live Science

To Skip the Technobabble, DO NOT read the Paragraphs in BLUE

A Copper algaecide, such as Copper sulfate pentahydrate, when added, can bond with water molecules giving us a brilliant “Copper sulfate Blue” but crystal clear pool as shown above. This reaction is known as hexaaquacopper.

The Technobabble: Copper sulfate pentahydrate (CuSO4.5H2O) is added to water, it dissolves quickly, giving us the crystal clear bluing of hexaaquacopper(II) ions [CuH2O)6]2+ (above). This is simply 6 water molecules (H2O) bonded to a Copper (Cu2+) cation. This exothermic reaction means that the copper sulfate pentahydrate (CuSO4.5H2O) generates heat as it dissolves. This also means the product, like calcium chloride, will dissolve better in cold water.

If we were to raise the pH or Total Alkalinity in a swimming pool that had copper present or adds a copper algaecide to a swimming pool that already had a high pH and/or Total Alkalinity, we could end up with a cloudy blue pool (above). This is commonly referred to as Copper carbonate. Lowering the pH and/or TA sloooowly should eliminate the appearance of the aftermath of an exploded Smurf, but if you add a large dose of acid quickly… we could turn the pool water Green.

The Technobabble: Increasing the number of carbonate ions in the solution, we would form copper(II) carbonate hydroxide (Cu2(OH)2CO3). This compound is completely insoluble. The copper(II) carbonate hydroxide (Cu2(OH)2CO3) would eventually settle to the pool’s floor or be removed through filtration. However, this could take quite a bit of time, depending on the filter type (sand, DE, or cartridge).

Adding acid to a swimming pool with a copper level could result in a pool filled with green water. This alarming reaction is known as tetrachlorocopper. The green color would be only temporary but is typically much more alarming to your clientele (the pool owner).

The Technobabble: If we were to add muriatic acid (HCl) to our swimming pool to lower the pH and Total Alkalinity, upon addition, the acid would disassociate into both Hydrogen (‎H2) and Chloride ions (Cl−). The chloride ions (from the hydrochloric acid) would then displace the H2O molecules in the hexaaquacopper(II) ions [CuH2O)6]2+ causing the water to turn green (four chloride ions replacing six water molecules creating tetrachlorocuprate(II) ions (Cl4Cu).

Increasing the pH with caustic soda or soda ash in a pool with a copper level could result in teal-colored staining about the pool. This is known as Copper hydroxide. This is not uncommon in saltwater pools due to by-products from the chlorine production process, raising the pH.

The Technobabble: If we were to add a dose of caustic soda (sodium hydroxide: NaOH) to the pool to increase pH, the hydroxide ions would then strip the hexaaquacopper(II) ions of hydrogen ions, leaving us with the neutral compound copper(II) hydroxide: Cu(OH)2. This complex would precipitate from the solution leaving a blue/green (teal) stain. Okay, so we do not typically use caustic soda in pool care nowadays. Still, we add other chemical balancing items that will create hydroxide ions upon addition (i.e., Soda ash (sodium carbonate), phosphates, although they do not contain a hydroxide ion, etc.). For those applications where a saltwater generator (saltwater pool) is used, remember that sodium hydroxide (NaOH) is also produced in the production of chlorine (electrolysis of the saline solution).

Cupric Oxide (CuO); Note: when adding alum as a stain treatment, only use products labeled for pool use, make certain your water chemistry values are in balance, and that you only add enough alum to cover the stain lightly.

If you have a copper level in the water and broadcast your chlorine shock, you could end up with blotchy mottled gray/black stains on the floor of the pool. It is extremely startling to a pool tech the first time this occurs, but it is usually only a temporary reaction. This is known as Cupric Oxide.

The Technobabble:  If a dose of calcium hypochlorite (CaCl₂O₂) is added to a body of water that contains copper, you may see the aftermath of a redox reaction. The chlorine from the cal hypo added will strip electrons from the copper (oxidize). The result is the insoluble Cupric Oxide (CuO), a black solid that readily stains. . If caught when freshly converted, this reaction may be reversed in some instances by covering the oxidated area with aluminum sulfate. The charcoal grey color is sometimes converted back to turquoise.

A pool with a high stabilizer and copper in the water can sometimes end up with blotchy reddish-purple staining about the walls and floor. This is called Copper-cyanurate.

Oddly enough, there is not a tremendous amount of research on copper-cyanurate (purple crystals), at least not on how it occurs in a swimming pool. We know that when non-chelated Copper is in the presence of a high Cyanuric acid level, the result is the precipitation of tiny purple crystals very similar to Amethyst. Yes!!! The blotchy-purple staining, sometimes referred to as Purple Haze, is actually teeny tiny little four-sided purple crystals. We also are aware that it is quite difficult to rid the pool of staining (crystals). In laboratory applications, chemists have suggested boiling acids or alkali solutions to mitigate purple crystals.

It is important to note that ascorbic acid does not always have the best results for removing copper stains. The product is better suited to removing those caused by iron. Always test a small area with a Vitamin C tablet before committing to a full pool treatment. Vitamin C is ascorbic acid, so if the tablet can remove the stain, the pool’s treatment should be successful. It is an inexpensive method of testing the product and why most Pool Professionals keep a bottle of Vitamin C tablets in their glove box.  Ascorbic acid is an electron donor and can often “bleach” a metal stain by replacing the electron that Chlorine had stripped away.

Note: the folks at onBalance have reported some success in converting turquoise copper stains to white with direct applications of hydrogen peroxide…

The Technobabble: The formula for the compound Copper-cyanurate, in my opinion, comes into question; Pub Chem lists the structural formula as C3H3Cu3N3O3; however, the reaction is more likely to mimic other metal cyanurates where a single atom of Copper displaces a single Hydrogen ion. We may find it better represented by Cu(C3N3O3H₂), as indicated by G. B. Seifer in his research document Cyanuric Acid and Cyanurates. The majority of studies focused on those minerals created in, and studied in, a laboratory environment by significantly heating the element (Copper) and then dissolving it into aqueous ammonia (NH₃) solution. In a 1992 publication titled Characterization of a Crystalline Residue from a Swimming Pool: Disodium Copper(11) Tetrakis (isocyanurate) Hexahydrate (Robert D. Hart, Brian W. Slcelton and Allan H. White – Chemistry Department, University of Western Australia) examining a specimen that had formed in (and was collected from) a swimming pool, the compound was identified as Na₂Cu(C3H₂N3O3)4.6H₂O. This was done through X-ray study and chemical analysis.

A recent discovery has found the compound, or at least something similar to Copper-cyanurate, naturally occurring in what is being credited as a previously unknown mineral. The new mineral, which has been given the name Joanneumite, resembles tiny violet crystals and is found in crevices in rock formations beneath the guano (aka: bat excrement). According to the authors (Hans-Peter Bojar, Franz Walter, and Judith Baumgartner) of the research doc, Joanneumite, with a structural formula of Cu(C3N3O3H₂)₂(NH3)₂, was discovered at Pabellón de Pica Mountain in Chile.

Have we been growing Joanneumite in swimming pools all along?

Consider the structural formula Cu(C3N3O3H₂)₂(NH3)₂, then that which the chemists at the University of Western Australia had identified for Copper-cyanurate as Na₂Cu(C3H₂N3O3)4.6H₂O. Okay, we get why Copper would be in rocks on a mountain, but where would the Cyanuric acid come from? We know that Cyanuric acid is produced in urea’s heat degradation, so it is feasible that bat guano would contain urea and generate heat as it decays. Over a prolonged period of time, the decaying bat poop’s heat could result in the production of Cyanuric acid (C3N3O3H3). No, we have not been growing Joanneumite, not exactly. This new mineral has been discovered is significant, and my assumptions in its creation take nothing away from this find. However, the difference between Joanneumite and Copper-cyanurate may come down to a pinch of salt (Na), a splash of water (H₂O), and a dash of ammonia (NH3).

Thank you to Que Hales and Kim Skinner, on balance, for the peer review, contributions, & proofread on this one

Hogg, CHEM2: Chemistry in Your World