Pool Sharing ? Is This a Thing? 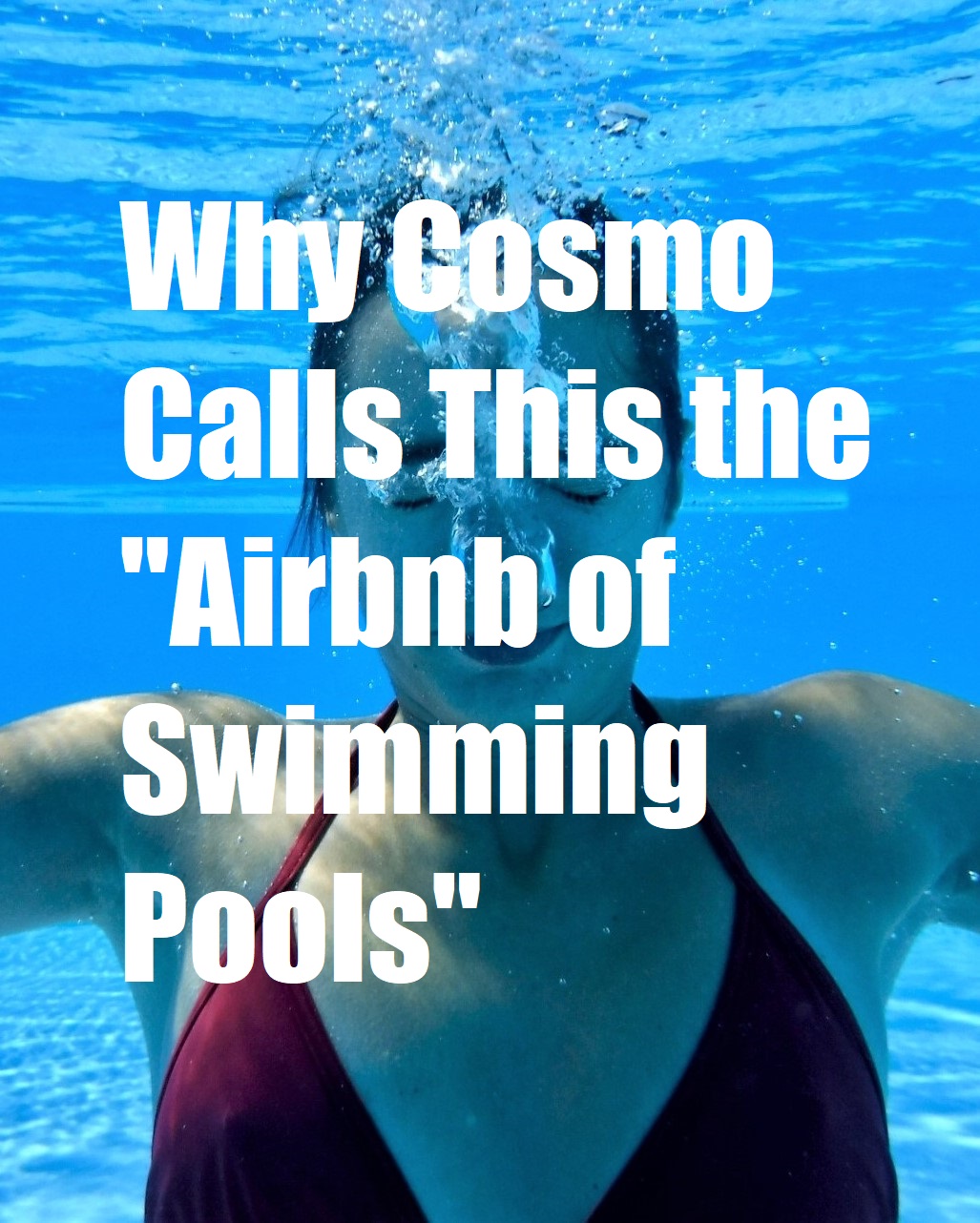 An Airbnb of Pools  – Cosmopolitan Magazine 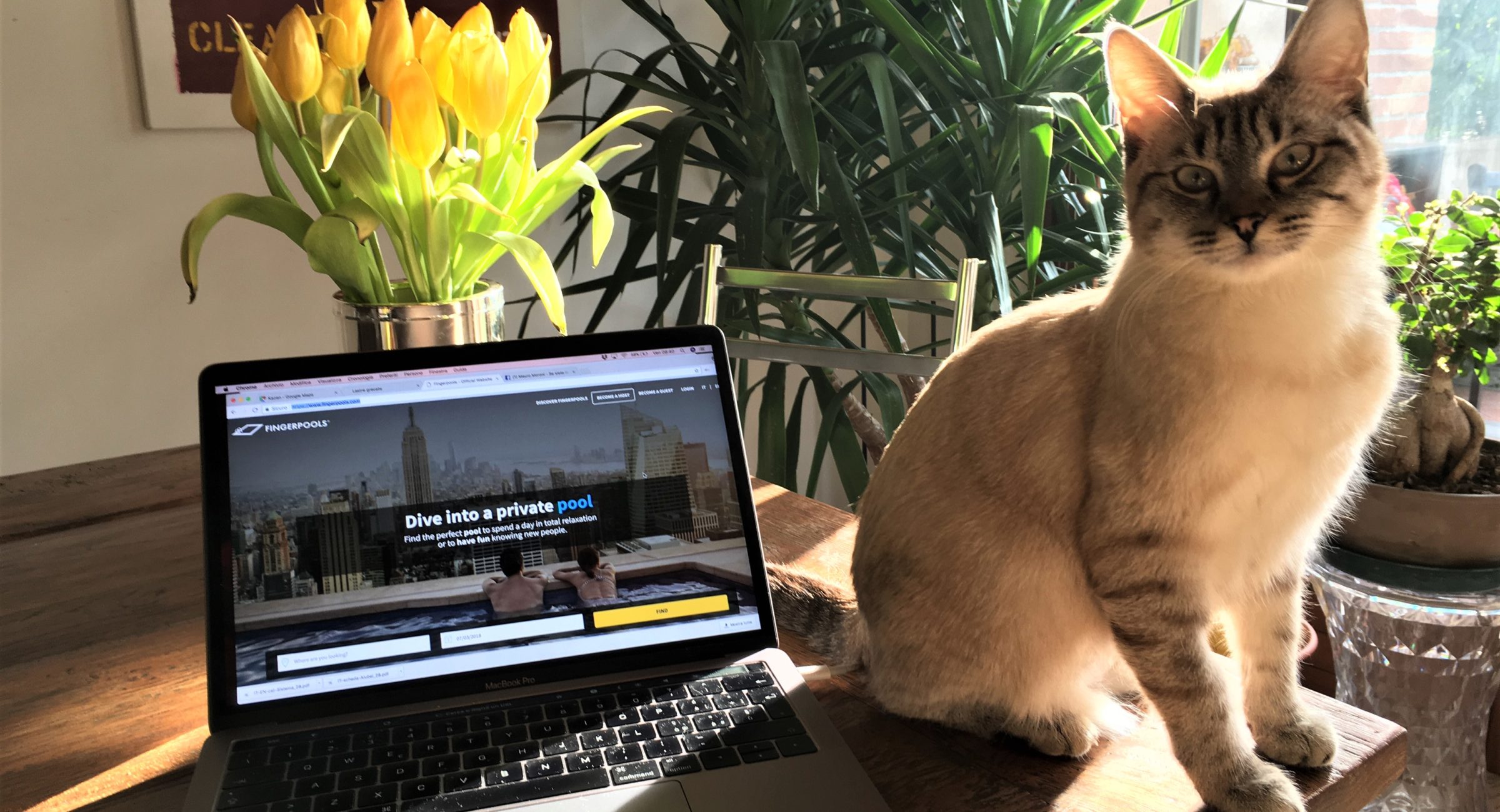 A shift in recent years allowing individuals to earn money in unique ways with personal belongings by “sharing” them has given birth to companies like Airbnb, Uber, RelayRides, TaskRabbit, and Lyft. Why not have a pool-sharing company as well? That is exactly what Paola Carobbio and Beatrice Adorni thought when they started Fingerpools in July of 2016, bringing to life the first international pool-sharing platform. Intrigued by the notion of “Pool Sharing”, and my head swarming with questions of water quality assurance, I decided to reach out for answers. Here is what Paola Carobbio, CEO and cofounder of Italian based Fingerpools, had to say about it when we spoke:

With a degree in philosophy from the University of Milan and then a long career in journalism, diving into a swimming pool related business seems polar opposite from what your original plans may have been. When you were in college working toward your degree, what were your career aspirations?

My aspiration as a child was to become an explorer, an astronaut or an inventor. However, one day I decided I wanted to be a reporter, to travel and to write for the most important Italian newspapers.

Things that I realized all thanks to my commitment. Then you change the world changes and its right that aspirations change too. Having new objectives – as in my case… coming up with a new market for pools – makes life longer and fills it. That is what my Grandma Barbara always says, and she is 95 years old and every year makes scarfs longer than the year before.

Beatrice Adorni is your partner and co-founder of Fingerpools. How did you two first meet?

They say best professional relationships never start with a salad. That is true! I met Beatrice in Bologna, at the disco, at 2011 New Year’s Eve’s party, and we both were pretty tipsy. Then it came up that Beatrice was in my cousin’s group of friends, so we continued hanging out in Bergamo, our town. And from acquaintances we became friends. I take care of her dog when she is away and she takes care of my cats when I am away. When you know someone from drunk, without masks, only two things can happen: you appreciate or detest that person. We luckily had the first option.

How did this idea of “pool sharing” first come about?

Ideas are always born from needs. We live in an enchanting medieval city near Milan and far from the sea, that in summer gets red-hot like an oven, forcing citizens to flock up in community pools (too crowded), or to travel to lakes and rivers (far and crowded), or to enroll to sport clubs with pool (crowded and expensive). It was June 2015, the temperature was near 40°C and we looked online for alternatives to the not much relaxing options offered by our region. However, the search went bad. Therefore, here came the idea. Why not joining sharing economy and pools? This way, who has not a pool can swim in the others’ ones, by paying, with the certainty not to end up into a sardine box. In addition, people who have a pool can earn something from a good they always lived as a cost, which is useful to amortize or abate maintenance costs. Which are high. They can even be more than $ 4.500,00 per year for a medium pool.

The name of your company is Fingerpools, is there a story behind the name? How did we come up with that?

You come to a point where you have to name your “thing”. In this way, you give it existence, too. We made a meeting and we had a list of 40 names each. There was every sort of name: poolscanner, poolpeople, poolday, youpool, poolfinder, poolsharing, etc. Then, looking for an available domain and social pages, we remained high and dry. Everything was already taken. Panic! There started the most challenging brainstorming in the history of the team. Beatrice has solved that with an elementary syllogism: people now book everything online from a smartphone with a finger; with us, you can book the pools, so “finger + pools” seemed to give the idea of our business model. We have only one problem: in Italy, many people do not get it. Luckily, we are international.

Since starting Fingerpools back in 2016, you have gained a ton of media attention. You and your company have appeared in dozens of magazines, including Cosmopolitan and GQ, did this surprise you.

As a former reporter, I am perfectly aware of Fingerpools being a very nice and endearing news to give in summer, because it satisfies an ancient need in a new way, and it fascinates the readers. Me myself, I would have proposed the news to my editorial board. So, I was not much surprised by the interest in Fingerpools showed by the press although we still are a small reality.

I was much more surprised about the visits to the website brought by the articles. When the article by the national newspaper “La Stampa” has been published, we had a stunning peak, with more than 25.000 page visualizations in one day, which sent the site on tilt. We were not prepared for all that and in the end, we just made a poor figure for a few hours. However, we understood our potential: people like the idea of swimming into the quiet and well-kept pool of their neighbor, instead of into the public one. Moreover, they like it a lot. 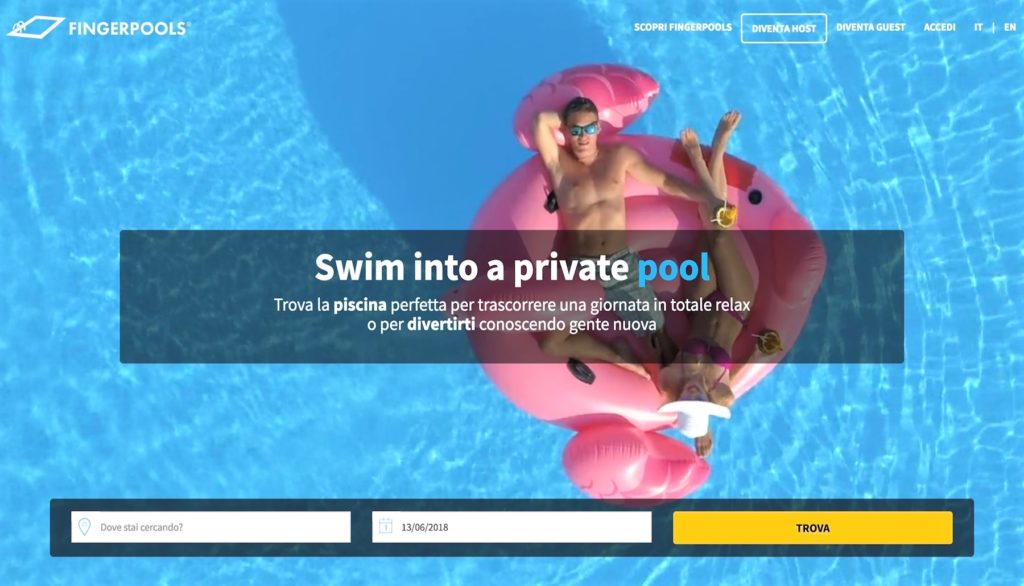 It is very simple, Fingerpools works with the same logic of the other and more famous sharing economy platforms. On one side you have the Hosts that subscribe for free and publish the ad about their pool: choosing the maximum number of people; the price, the days; the times; the extra services (drink, food, wifi, massage, parking, etc.); the rules to be followed; the kind of allowed guest (couples, friends, families, lgbt only, naturists, disabled, etc.); animals access (we also have pools that accept dogs!); and much more. On the other side, you have the Guests, who can book with their credit card a pool day that responds to their exigencies of quietness, community, privacy, and aesthetics. After the booking, you have to wait for the Host’s confirmation. When it comes, the booking is confirmed and the money is withdrawn, the Guest can show up at the pool in the booked date to enjoy dips in holy peace, and the Host gets his money after the experience.

Are you international, or is this just an Italy thing?

Fingerpools was born international, we have 240 Hosts in cities of 11 Countries of the world (in the U.S. we have only one host from Hollywood, but his pool is not active for now. We are sorry about that, but Hosts from the U.S. will come). The majority of Hosts at this moment is from Italy and South-east Asia; to develop immediately globally a newborn project requires investments and human resources that a startup has not by its nature. The big ones teach to focus on a single market, to grow up there and then to replicate the model in other Countries. That is a right reasoning, but Fingerpools is seasonal, so it had to be born with an international vocation from the beginning.

At just over two years in business, would you two consider your venture to be successful? How large have you grown?

Pool sharing represents an evolution for both the swimming pool and the sharing economy world. To understand if a new business model actually works it takes 5 years minimum, the people from Airbnb know that very well, as they were going to abort their project before they were funded.

Fingerpools is online since March 2017 and its beta version is public since June of the same year; the startup has not been accelerated, incubated or funded by anyone because the swimming pools sector, unfortunately – despite it counts more than 22 million pools in the world – doesn’t get the interest of the universe of economy, of finance and of politics. Therefore, with the work of two people only and with very little economic resources we collected 240 Hosts, more than 300 Guests and more than 50 reservations. Are we going well? Are we going badly? If we had a term of comparison we would know that, but we have not. The only certain thing is that with 1.000 active pools we would be economically sustainable, and that is the first goal we want to reach to be able to say for sure that yes, this adventure can be confirmed a success.

Do you have a means of monitoring pool quality (water chemistry, clarity, equipment condition, safety, etc.)?

Last year we personally visited some of our Hosts to have a look not only to the quality of the pools and their surroundings, but also to the quality of the hospitality. In addition, we have been satisfied in 97% of cases. For the near future, we are studying with the main Italian Pool Association, ProfessioneAcqua, a certification called “Blue-dot” (that will appear on the ad online) to reward swimming pools that respect the quality and safety requirements. Practically, the associates will do two surprise checks during the year to verify if the pool deserves the Blue-dot or not. We would like to replicate the same mechanism in other Countries with local associations. We want to say proudly, “Fingerpools, only safe pools”.

Finally, there are also users’ feedback on the website, very important, that inevitably start a virtuous mechanism: who deserves, is rewarded; who does bad, is penalized. Vox populi, vox Dei.

The fact that Fingerpools has a plan in place to monitor the health and safety of the host pool locations 2x per year (the same frequency as most U.S. Health Departments check public pools within their jurisdiction) and will be attending a pool industry training program to educate themselves, in order to know what to look for, is fantastic. Who knows, I may even see Paola and Beatrice in one of the Pool Operator Certification classes that I offer one day.

Paola mentioned (above) that they have pool-sharing hosts that allow dogs in the pools, but is the pool safe for the dog? Read More